The rotator was a modified "Prop-pitch" motor.

Antennas: Since the TELREX christmas tree (3, element TELREX full-size rotary beams for 20, 15 and 10m) had been damaged

The rotator was a reconditioned KR-2000RC

Software: Since 1993 we use the "SP" Version 7.0 program for Packet Radio (on 70cm) and "SWISS-Log" Version 3.8 for logging purposes, ASAPS V.2.2 for HF-propagation computation, the Daily Solar Geophysical Data Broadcast Processor Database Manager Version 1.02 and the Professional Dynamic Auroral Oval Simulator Version 2.00 for computation of solar- and geomagnetic activity.

In 1954 on June the 10th we contacted, for the first time, YV5EU in Caracas. Gus happened to be ex-ON4LO before the second world-war.

Licensed in 1936, he started by building his complete station including inductors and even variable condensers!

He immigrated to Venezuela and became a Venezuelan citizen and obtained the call YV5EU.

His mother lived in Brussels and came often to our place to listen to her son. 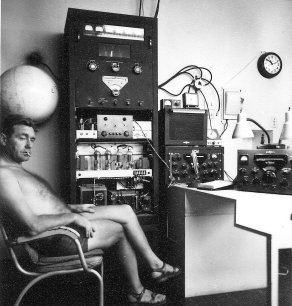 Besides our Sunday schedule we had many contacts for antenna/propagation tests on all HF bands 80 through 10 m.

Gus was a serious antenna experimenter; he even constructed a 1 km long-wire, strung between 2 hilltops, for comparison tests with yagi's and dipoles!

His QTH was on top of a hill overlooking Caracas city. A fantastic location, we where able to communicate in spite of  the most poor propagation conditions, only a black-out could stop us.

In 1973 Gus obtained a license for Spain with the call EA6CR.

From then on Gus resided more and more on the island of Ibiza. We had made 971 qso's with his call YV5EU.

This event coincided with his 75years birthday (June 6). 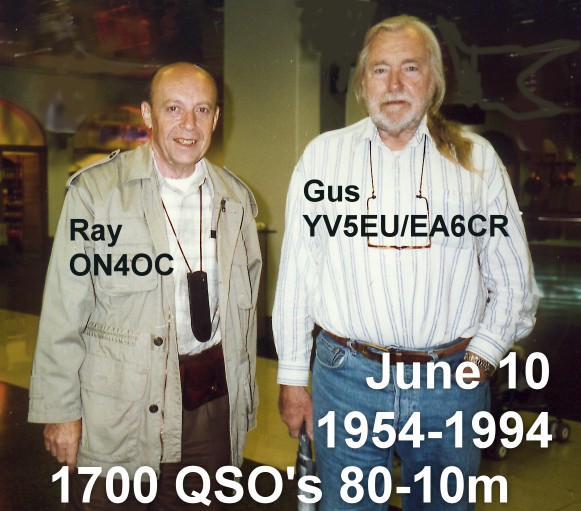 Then  Gus was  mostly on Ibiza. He operated with his Drake equipment and a 5 element FRITZEL. For 80 and 40 he has several dipoles and a vertical.

The 2nd week of September 2002, the QTH of EA6CR was hit by a direct lightning flash, which caused severe damage to his equipment.

Simultaneously he got very serious health problems. Our last QSO, was on the September the 1st .